Medical devices play an essential role in the prevention, diagnosis and treatment of diseases and in the delivery of high quality health care. The Cardiovascular Devices Research Laboratory is actively involved in the research and development of innovative medical devices and in training the next generation of medical device professionals for Canada.

The group is also actively involved at the national and international level in the development and promotion of use of standards in the medical device field. The Director, Tofy Mussivand, serves as the chair of the Canadian Advisory Committee (Implants for Surgery) with the International Standardization Organization (ISO). In addition, he serves on Health Canada’s Scientific Advisory Committee on medical devices used in the cardiovascular system.

Most recently, the group was selected by the Government of India to review their new regulatory framework legislation for medical device safety.

An initial mandate of the group was to identify and develop a cluster of medical device expertise from across faculties, departments and institutions, with the goals of establishing degree granting programs in Biomedical Engineering and developing the infrastructure required for advanced medical device research, development and training.

After studying with the group many former students have gone to pursue their MD/PhD, and a wide variety of careers including prominent positions in industry, government and academia. Many of these great successes can be attributed to our exceptional mentoring and the unique learning opportunities which arose from time spent with the group.

World Society of Cardio-Thoracic Surgeons (WSCTS): In August 2006, the 16th World Congress of the WSCTS took place in Ottawa. Led by Tofy Mussivand, the multidisciplinary congress focused on some of the fastest-evolving areas in cardio-thoracic healthcare, including medical devices, interventional procedures, pharmaceutical agents and surgical approaches. Recognizing the importance of interaction between disciplines, congress organizers shaped the program to “cut across traditional discipline boundaries” and involve the entire cardio-thoracic healthcare delivery team. This also included other important stakeholders such as industry and government representatives and the community. Delegates also had the opportunity to honour medicine’s “Living Legends”.

World Artificial-Organ, Immunology and Transplantation Society (WAITS): The 6th symposium for WAITS, was held in 2001 in Ottawa, Canada. The symposium brought together scholars in sciences related to organ transplantation, immunology and artificial organs, together in one room for exchange and exploration of innovative ideas by integrating updated information and the experience of different nations.

This symposium successfully endeavored to share information including: clinical data and experience, surgical techniques and treatment modalities related to artificial organs, immunology and transplantation, as well as on emerging technologies related to these fields. The WAITS symposium also allowed attendees to learn from the experiences of world leading medical visionaries who participated in a special session entitled, “Living Legends - Lessons Learned & Future Visions”

Current projects underway include a reusable carbon dioxide adsorbent device for use during surgery, an interventional cardiology device for delivering coronary stents, an electronic nose for differential diagnosis of heart failure in the emergency room, and many others. 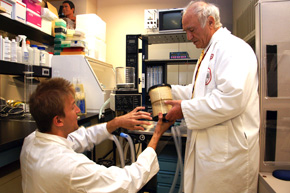 Thermal Therapy
This project is investigating the use of intermittent heat to treat heart failure patients. The goal is to develop a simple, cost-effective and non-invasive method that can be widely utilized, including in developing nations where heart failure is now a leading cause of death.

Portable DNA Extraction Device (Biosecurity)
This research initiative involves a novel process developed in the laboratory that allows sampling and rapid extraction of DNA from non-invasive samples such as fingerprints. This method for rapid extraction of DNA from non-invasive samples has significant potential for commercialization. In July of 2003, UPI (United Press International) Science News wrote a story on the research that was then carried in a number of publications including the Washington Times and the National Post. 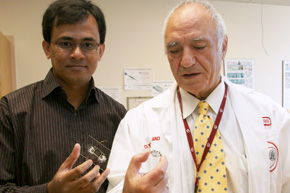 Electronic Nose Device (Enose)
Enose is a project that is examining the potential to utilize existing electronic nose technology to develop a non-invasive diagnosis of heart failure in patients experiencing shortness of breath. Rather than diagnosis via blood sample, which can take up to 15 minutes, Enose will use advanced nonlinear algorithms modelled after the body's own neural network methods to analyze breath samples. This will enable hospital emergency staff to quickly diagnose or exclude congestive heart failure as the cause of shortness of breath, allowing patients to receive treatment much sooner.

Artificial Hearts/Mechanical Circulatory Support
For patients with end-stage heart failure, mechanical circulatory support devices can be used to aid the failing heart by taking on some of the heart's pumping functions. Research and development activities related to the artificial heart field began in the late 1980s. This work has already brought significant international prestige and acclaim to Canada and the Heart Institute. The research also led to the Institute's first spin off company in 1996 (World Heart Corporation).

Mathematical Modeling
Mathematical Modeling is a series of projects jointly supervised by the Chair, Tofy Mussivand, and Donald Russell from Carleton University. This area is designed to adapt advanced techniques to the medical devices field, specifically developing mathematical models for the cardiovascular system.

Biofilms are populations of bacteria which have a special ability to attach themselves to the surface of implanted medical devices. Unlike non-adherent forms of bacteria, biofilms can be extremely resistant to antibiotics, creating significant clinical issues for doctors and patients alike. 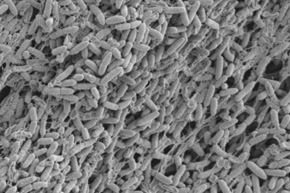 Medical device biofilm grown in the lab for assessment of the in situ sterilization device.

Electrolyte Detection
A great deal of information about the body's state can be learned from a patient's blood sample and the concentrations of various electrolytes, such as potassium found within it. Research has shown that consistent and elevated concentrations of potassium can offer early warning signs of heart failure. While the mineral is necessary for healthy muscle and heart contraction, in larger concentrations it is known to inhibit the effective transmission of nerve impulses, influencing the strength of muscle contraction and subsequently weakening the heart. The objective of this study is to design and test a non-invasive optical sensor to determine electrolyte concentrations in blood.

Transcutaneous Energy Transfer
As the need for implantable assist devices grows, so does the demand for non-invasive methods of powering them. Utilizing a pair of internal and external coils, the Transcutaneous Energy Transfer system allows energy transfer through intact skin and tissue to power implantable assist devices such as pacemakers and artificial hearts.

Biotelemetry
After a ventricular assist device implantation, patients require regular monitoring by hospital clinical staff. Due to recent advancements in technology, portable ventricular assist devices allow for patients to be discharged from the hospital sooner, but once home their condition still needs to be monitored. Biotelemetry is a system designed to control and check implanted medical devices using telecommunications.

Devices to monitor and control implanted devices via a remote transmitter system from the patient's implanted device to the closest medical facility have been developed. By allowing doctors to access the patients remotely, health care costs could be significantly reduced while accessibility to quality medical care would be improved.

The faculty, advisory board, students and staff comprise the backbone of the Cardiovascular Devices/Medical Devices Centre group. The combined and dedicated efforts and contributions of these people have helped to make the centre what it is today; a team of highly qualified, innovative and motivated professionals, including professors, doctors, scientists and engineers whom all share a common vision of bettering society through the research and development of medical devices. 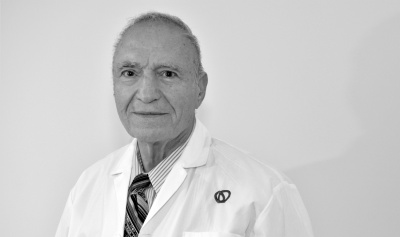