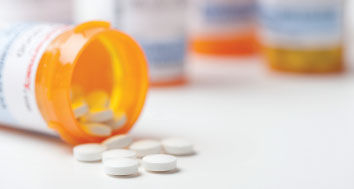 Drugs and devices approved for the Canadian market must undergo extensive clinical testing to prove their safety and effectiveness. But even the best-designed clinical trials are limited in the time they can follow patients and how closely their participants resemble the general population. Once a drug is approved and in use, questions about its safety and effectiveness can still emerge.

The international team brings together expertise in biostatistics, health economics and knowledge translation.

To tackle this issue, George Wells a biostatistician and head of the University of Ottawa Heart Institute’s Cardiovascular Research Methods Centre, has created an innovative collaborative under an initiative from the Drug Safety and Effectiveness Network (DSEN)—a partnership between the Canadian Institutes of Health Research and Health Canada.

“We have drugs out there where the safety may be called into question, and our regulators and various other health care jurisdictions need to get an answer for the safety of the Canadian public,” said Wells.

Several ways exist to look at the safety and efficacy of drugs already on the market, including dredging the large administrative databases available across Canada, but most of these methods are time consuming, explained Wells. He and his colleagues are instead using a statistical method called a network meta-analysis. A regular meta-analysis uses mathematical methods to combine the results from several different trials. The more information that is combined, the greater the likelihood that small but real safety issues will be uncovered.

The international team that Wells assembled brings together expertise in biostatistics, health economics and knowledge translation drawn from Ottawa, elsewhere in Canada, the United States and Europe. As a proof-of-concept, the team looked at the relative safety and cost-effectiveness of several newer oral anticoagulants compared with the old workhorse drug in the class, warfarin. Warfarin and the newer oral anticoagulants are prescribed to patients with atrial fibrillation in order to prevent the formation of blood clots, which can lead to stroke.

The team focused on three of the newer drugs—dabigatran, rivaroxaban and apixaban, all of which had been compared to adjusted-dose warfarin in clinical trials but never to one another. The analysis found the optimal drug in terms of cost-effectiveness (taking both safety and efficacy into account) actually varied between different patient populations, with a higher dose of apixaban or dabigatran proving optimal in different scenarios.

With the success of that study, the team went on to create a larger mathematical network with more comparisons, adding anti-platelet drugs, like aspirin and clopidogrel, to their models. Any of these models can be rapidly expanded to include new drugs in the same class as they come to market.

In another project, the collaborative is examining a drug called Stalevo. Used to treat Parkinson’s disease, the drug is suspected of having negative cardiovascular side effects.

“Rather than having the concern just languish out there or conduct a clinical study that may take a few years or, for that matter, dip into some of our large databases, which may take a year or two, with our methodology, we can turn it around and see how strong that signal is within four to six months,” said Wells. The analysis could then provide the justification for larger studies.

A third effort has the team examining whether adding behavioural support programs to drug therapy for smoking cessation improves the overall quit rate. Before the recent advent of effective drug therapy, recounted Wells, “the behavioural side was all that we had. So now the question is, if you take the behavioural programs and add them to the drug programs, do you get a bigger effect than if you just use drugs?”

The DSEN project team—officially called the Canadian Collaboration for Drug Safety, Effectiveness, and Network Meta-Analysis—is organized in four clusters: systematic review of safety and effectiveness, biostatistics, economics and knowledge translation. “Knowledge translation focuses on how we take the information we generate and make it understandable to all of the p’s: patients, physicians, the public, policy makers and politicians,” Wells explained.

As part of the effort, the team will build an infrastructure and evidence repository to aid in rapid turnaround for these safety and effectiveness issues as they arise. In addition to strengthening its international collaborations and continually updating its models, the team now has several graduate students at the University of Ottawa working on these methodologies and their applications. The hope is that as the students embark on careers as independent investigators, they will disseminate these methods across the country.