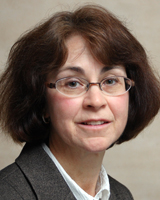 [Editor’s note: This article is an update of a previously published story.]

Heart disease is the leading cause of death for women worldwide, yet it remains under-diagnosed and symptoms often go unrecognized. In July of this year, the Canadian Women’s Heart Health Centre published the results of a national survey indicating that Canadian women themselves are not aware of the symptoms and risk factors.

The Beat sat down with Kathryn Ascah, MD, to talk about the issue of women and heart disease. Dr. Ascah has been a cardiologist at the University of Ottawa Heart Institute since 1986 and is Director of the Stress and Echocardiography Laboratories.

The Beat: As the second leading cause of death in Canadian women and the leading cause worldwide, heart disease remains under-diagnosed and under-recognized. Why do you think that’s still the case?

Dr. Ascah: I think both women and men still have this preconceived notion that coronary disease or a heart attack involves severe pain, but in many cases, particularly in women, it’s more of a feeling of discomfort—such as pressure or indigestion. And this discomfort can be in an atypical location. Another common symptom is shortness of breath. A lot of people just do not equate shortness of breath with cardiac disease; they think it’s the lungs, or just that they’re overweight. But for some people, particularly with diabetes, shortness of breath may be the only symptom of cardiac disease.

So, I think there is still a lack of awareness of what the symptoms are. Even some patients who have coronary disease and who’ve been through treatment don’t understand that their symptoms are cardiac related. More education and increasing awareness are really important. There have certainly been improvements since the 1990s, but awareness seems to have hit a bit of a wall. In particular, we haven’t really increased the knowledge of people who are medically underserved, from immigrant backgrounds in particular.

Another set of barriers to diagnosis is that women tend to downplay their symptoms, and they often outlive their partners. So, husbands usually still have their wives, who will notice that they’re slowing down and showing symptoms and will get them to see a doctor. But older women are often alone, and no one notices that they’re not quite capable of doing what they used to do. And women often pass their symptoms off as normal—‘Well, I’m 75 or 80, everyone my age feels some aches and pains now and then.’ So, there are also psycho-social barriers to getting a diagnosis.

The Beat: Speaking of diagnosis, are there any gender-based issues in diagnosing heart disease?

Dr. Ascah: In regular stress testing there are, particularly in younger women. Some changes we see on the electrocardiogram that occur with lack of blood supply due to ischemia can also be caused by estrogen. It’s still a really good test, but it may not be as specific in women—women tend to have more false positives. It may take more testing to rule cardiac disease in or out completely.

Exercise testing is a good screening test for women. And to go back to the atypical symptoms we often see, that’s where I think exercise testing as opposed to other specialized tests can be really important. People will often get their atypical symptoms clearly coupled with lack of blood supply. I’ve had patients who only had elbow pain or wrist pain or pain on the top of their head. And it’s very specific—you put them on the treadmill and they experience that pain again.

[Note: In June 2014, the American Heart Association released a statement highlighting the fact that diagnosing coronary heart disease in women has become more accurate due to recent gender-specific research. The statement underscored the importance of understanding clinically relevant differences between women and men and included recommendations for healthcare professionals when diagnosing heart disease in women.]

The Beat: Once you’ve identified cardiac disease, is it fairly equivalent in terms of treatment?

Dr. Ascah: We’re definitely more on equal footing now than we used to be in terms of invasive treatment, particularly since we now have cardiac stents that are sized for women. It used to be that in bypass surgery women had poorer outcomes—their blood vessels are smaller and more difficult to work with. But stents have gotten smaller and more technologically advanced, so that now women are candidates for stenting instead of bypass surgery, and there’s the capability for more invasive treatment for women.

The Beat: What about rehabilitation?

Dr. Ascah: I think you still tend to see more men than women in cardiac rehabilitation, which is a problem for women. A person’s prognosis really worsens once they become sedentary. A lot of this disparity is due to issues with access. Women with cardiac disease tend to be older than men with an equivalent condition. So like we talked about with diagnosis, they’re more likely to be living alone, they may not be able to drive and may not have anyone to help them get to rehab.

The Beat: Are there any differences between men and women in terms of specific risk factors for heart disease?

Another thing, which kind of ties into prevention, is that women tend to be the primary caretakers—of their kids, of their husband, of their aging parents—and they’re often working full time as well. It’s hard for them to find time to get out and exercise, which is so important. Sometimes I’ll actually write a woman a prescription for exercise, to help them see how important it is—it’s probably even more important than medication in some cases.

Because women are at lower risk prior to menopause, sometimes they don’t get a push to make the lifestyle changes that are necessary to prevent cardiac disease. We may need to find a different way of getting them into the clinic, getting them to realize how important healthy lifestyle is, and do this soon enough so that they can make the necessary changes.