MicroRNAs: New Pieces to the Puzzle

It has been little more than a decade since researchers categorized the full suite of genes contained in the human body, but this exciting milestone merely opened up an even more challenging frontier. There turns out to be only about 20,000 genes associated with the famous DNA molecule—a sizable number, to be sure, but far too few to account for the kaleidoscope of features that makes each of us unique.

What has become evident is that genes are only the most obvious tier of a complex array of biochemical mechanisms that determines the function of those genes and, in turn, how our bodies develop and behave. Among the most interesting of these mechanisms are a sub-group of ribonucleic acids (RNAs) called microRNAs, or miRNAs for short. These molecules have emerged as key operators in many critical functions, which makes them good prospects for therapies to address health problems. 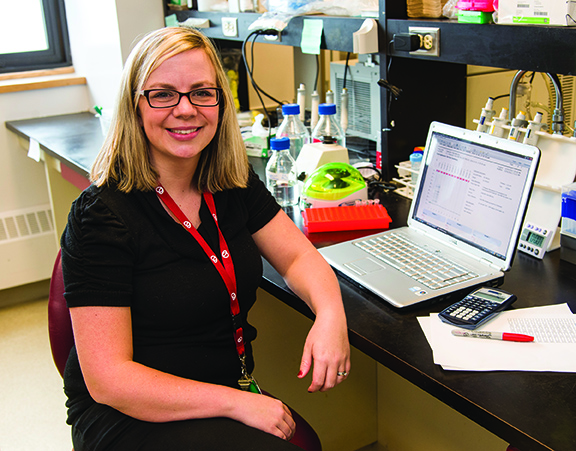 Katey Rayner, PhD, has a favourite example called miRNA33. As Director of the Heart Institute’s Cardiometabolic microRNA Laboratory, she has focused on the important role this particular miRNA plays in regulating high-density lipoprotein (HDL), the “good” cholesterol that helps to flush out fatty molecules that can cause blockages in the arteries.

“Right away, we asked whether we can modify miRNA33 to raise the level of good cholesterol,” said Dr. Rayner, suggesting that this strategy would tackle many of the heart problems caused by too much cholesterol in our diets.

In fact, the buildup of plaque in blood vessel walls that leads to coronary artery disease is a form of inflammation, a process that requires energy to maintain. Dr. Rayner noted that our modern diet provides our bodies with far more energy than most people took in even a few decades ago, never mind a few thousand years ago. If miRNA is the key mediator of this excess energy, it could well be a critical link to the current problem of heart disease.

“Inflammation is a lot like cancer,” she said. “Cancer cells hijack your body’s energy supply. They take it from wherever they can find it—blood cells, glucose, wherever. Inflammatory cells are very similar in this way, and heart disease is primarily based on inflammatory cells.”

Rayner’s laboratory has been working closely with a San Diego–based company, Regulus Therapeutics, which has created a product to inhibit the action of miRNA33. This collaboration is now on the verge of clinical trials that could determine whether the product could reduce the energy transfers that lead to heart disease, without compromising any of the body’s essential functions.

“The biggest challenge behind miRNAs is that they don’t do just one thing, they do a lot of different things,” she said. “They’ve evolved to regulate multiple activities along the same pathway.”

A postdoctoral fellow, Denuja Karunakaran, PhD, presented this work at the AHA Scientific Sessions. Dr. Rayner described the event as a major clearing house for the latest and most tantalizing findings in the field, which makes it an honour to be selected for such a presentation.

Dr. Rayner is prepared to weather possible critical comments that could stem from the fact that this entire field of research is just a few years old, and miRNA33 may still be incompletely understood.

“The complexity of miRNAs can be overwhelming,” she admitted, “but we already know so much about the biology of heart disease; we’re guided by the search for previously unknown regulatory mechanisms. We’re trying to fill in some of the blanks.”