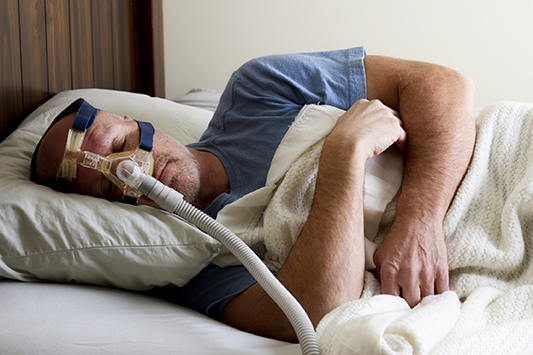 Getting the right amount of sleep is also important for good heart health. A South Korean study of more than 47,000 adults found that people who sleep about seven hours a night have significantly fewer calcium deposits in their arteries. These deposits narrow blood vessels, stiffen artery walls and can lead to heart attack.

Too much sleep, it turns out, can be as bad for your heart health as too little. People who slept five or fewer hours per night or more than nine hours per night had poorer outcomes on indicators of heart health. And regardless of how many hours people slept, poor quality sleep had the same effect on people’s hearts—calcium deposits and stiffening of the arteries.

What Is Sleep Apnea?

Sleep apnea is a condition in which sufferers stop breathing anywhere from five to 30 times per hour while they are sleeping. In the United States, one in five adults suffers from at least mild sleep apnea, and it afflicts more men than women. Risk factors for sleep apnea include excess weight, narrower neck circumference or airway, and smoking.

People with sleep apnea are not necessarily aware that they are waking so much during the night, but they will know that they feel tired during the day.

The most common form of sleep apnea is obstructive sleep apnea (OSA), in which excessive weight on the upper chest and neck obstructs air flow.

In the less-common central sleep apnea (CSA), the brain doesn’t send the proper signals to the diaphragm to contract and expand (the mechanism of breathing).

Sleep apnea is diagnosed through a sleep study, conducted in a sleep laboratory, to determine whether there are stoppages in breathing during sleep. Mild cases of OSA can be treated with lifestyle changes, such as losing weight or quitting smoking. More severe cases can be helped with continuous positive airway pressure (CPAP), which involves wearing an air-pressure-fed mask during sleep that keeps the airway open.

Haissam Haddad, MD, is director of the Heart Failure program at the University of Ottawa Heart Institute. He recently published a review of the most recent evidence on sleep-disordered breathing (including sleep apnea) and heart failure. Three findings were clear:

Less clear are the findings regarding central sleep apnea (CSA), in which the airway is open but the brain fails to tell the body to breathe. Certainly, CSA is more common in people suffering from heart failure than in the general population, where it is rare, and can make heart failure symptoms worse. But the nature of this type of sleep disorder means that treatment must be decided on a case-by-case basis, and CPAP may not help many patients with this form of sleep apnea.

Given the high rates of sleep apnea among those with heart disease, Dr. Haddad recommends that cardiologists and, indeed, family physicians, screen all patients as part of a patient assessment to determine who should go on to have a sleep study.

“Identifying and treating sleep apnea can improve survival and slow deterioration due to heart failure,” he said. “Questionnaires found on the Internet are a simple and inexpensive screening tool, but they’re not in widespread use. Many physicians and even cardiologists aren’t familiar with the role of sleep apnea in heart disease. It’s still an evolving risk factor. We’ll see in the future.”

After 15 years at the Heart Institute, Dr. Haddad is taking on a new challenge, as Unified Chief of Medicine at the University of Saskatoon and the Saskatoon Health Region, and Provincial Lead in Clinical Care Education. While he is looking forward to the new challenges, he said he will miss his patients the most. And he hasn’t ruled out a return to the Heart Institute—he’s not selling his house just yet, he said!