A Meeting of Minds: A Gateway for the Next Generation 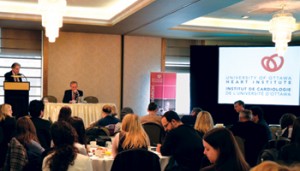 The Ottawa Heart Research Conference, hosted by the University of Ottawa Heart Institute, brought together an array of researchers that included leading figures from North America and Europe for a lively exploration of “Emerging Pathways in Cardiovascular Disease.”

A recent conference mounted by the University of Ottawa Heart Institute, which ostensibly bid a fond farewell to two retiring researchers, also captured the essence of how such gatherings animate and motivate the scientific community. In fact, the Ottawa Heart Research Conference provided nothing less than a showcase for some of the world’s most outstanding investigators in cardiac research, and a forum where newcomers could gain an unrivalled perspective on the field.

About 100 people attended the mid-May conference, which was held at Ottawa’s Lord Elgin Hotel to honour the scientific legacies of Yves Marcel, PhD, and Ross Milne, PhD. Both have been with the Heart Institute since 1992, and by the end of the year, they each expect to cut back on their research routines, though neither will be cutting ties with their colleagues. And with good reason: As the day’s proceedings revealed, they remain permanently engaged with a number of research enterprises that they were responsible for creating.

Entitled “Emerging Pathways in Cardiovascular Disease,” the proceedings consisted of 10 presentations that defined the various cutting edges of this subject, including the genetic variants, microRNA and various cellular mechanisms involved in cholesterol metabolism and disease progression. There were also formal presentations of distinguished scientist awards to Marcel and Milne, along with retirement gifts from their colleagues. Above all, there was plenty of time for people to mingle and learn the kinds of things that do not necessarily end up on the pages of scholarly journals.

It might be easy to think of the contents of those journals as the ultimate form of scientific expression, but the real lifeblood of science is on display when scientists get together in this way. Here is where debates thrive, personalities clash, collaborations emerge and novel ideas come to light.

“Positive results, negative results—they’re all interesting,” said Dr. Edward Fisher of the New York University School of Medicine. “Of course, we all hope to have some new and important statement to make about whatever we’re working on. But we’re addicted to results, and to be able to discuss them with experts in various areas is important.”

Dr. Fisher’s own presentation dealt with his work on very low-density lipoproteins (VLDLs), which degrade into the more familiar low-density lipoproteins (LDLs) that can convey cholesterol to the walls of blood vessels, setting the stage for the beginning of the plaques responsible for atherosclerosis. He emphasized the importance of understanding this degradation process by pointing out that it is linked to the presence of another agent, apolipoprotein B100, which is crucial to the secretion of VLDLs from the liver.

He added that it was satisfying to provide this kind of information to the meeting, which brought together individuals who are dealing with other kinds of similarly challenging observations at the unexplored frontier of heart research. It also made for some lively question-and-answer segments, especially when presenters were bold enough to offer up unpublished findings or observations that had not turned out as anyone had expected.

“I would call it highly interactive,” observed Marlys Koschinsky, PhD, Dean of the University of Windsor’s Faculty of Science, who moderated the afternoon sessions. “People come together in groups like this and it’s a constant refining. The best scientists are open-minded and not afraid to hear something that contradicts what they think.”

By way of example, discussion of Ross Milne’s work on diabetes and atherosclerosis demonstrated the evolution of fundamental ideas about cardiovascular health. The link between these two conditions has always been clear and led to an assumption that the biochemical changes brought on by diabetes affect proteins directly responsible for the health of the body’s blood vessels.

Milne, Director of the Diabetes and Atherosclerosis Laboratory, clarified that assumption in his honorary lecture, tracing some of the most significant of these changes to stress caused when diabetes leads to increased amounts of reactive dicarbonyl. He outlined how this key compound modifies LDLs so as to cause a buildup of macrophage cells and lipids on artery walls.

Yves Marcel, Director of the HDL Biology Laboratory, in his own honorary lecture, described a similarly significant change in the way researchers are viewing long-standing health problems. He focused on a process called autophagy, whereby individual cells sort out which materials they will excrete and which they will recycle. Although the proteins responsible for this process have been known for some 30 years, only now is their behaviour being tied to ailments such as obesity or atherosclerosis.

Ross Milne and Yves Marcel both confessed that they would not necessarily seek out the centre stage of an event for its own sake, but they were quite willing to let their retirement serve as the inspiration for a dynamic scientific conference.

“It was just a great day, and totally unexpected,” said Milne, adding that he was especially pleased by the comfortable, open atmosphere among the participants. “They were willing to share their ideas and their results.”

He was particularly pleased by the number of up-and-coming young researchers who were present, recounting the significance of such encounters during the course of his own career. He actually began university with an eye toward becoming a dentist, only later developing an interest in biochemistry. But he did not remain fixed in a narrow specialty. He veered into the field of diabetic complications of heart disease as recently as 2000, a shift he regarded as highly challenging but no less rewarding. Yves Marcel noted that he is still working with trainees, eager to help them overcome the practical obstacles to finding jobs, so as to keep them working in science. Although he expects to spend a good part of each year in his native France, he also expects to continue working part time at the Heart Institute. While he has always been certain of why such work remains important to him, the conference served as a dramatic reminder. “It was touching,” he said.

“It was a very good moment.

Mireille Ouimet, PhD, a post-doctoral fellow at the New York University School of Medicine, was introduced to the implications of autophagy while working with Marcel at the Heart Institute. She returned to honour her mentor and discuss her ongoing research, along with welcoming a chance to meet some of the leading figures in heart research.

“We don’t get many opportunities to interact with the big shots in the field,” she noted, suggesting that it was all the more important for students and younger researchers to take advantage of such occasions. “It’s not just about the talks. It’s about forming relationships, initiating collaborations, networking.”

Senior researchers feel much the same way. Robert Raffai, PhD, now a professor of surgery at the University of California, San Francisco, graduated from Ross Milne’s laboratory and was pleased to see young researchers dotted around the room. He suggested that academic retirement functions are often too small to place a retiree’s contributions in the appropriate context, nor do such events always engage these new researchers, who need to see that context in order to take stock of their own careers.

Raffai discussed how his own graduate and doctoral studies introduced him to apolipoprotein  E, which set the stage for his later work on a definitive mouse model for exploring the role of this agent in vascular health. Apolipoprotein E has since been identified as one of the key participants in the interactions that cause the immune system to respond to inflammation of the blood vessels, which could serve as a way of keeping atherosclerosis at bay.

He added that the sizable and varied group brought together for the conference should serve as an example for anyone organizing such an event. “Try to invite more of the trainees who have benefited from the work of these senior researchers,” he said. “Give them a little bit more perspective.”

That advice resonated with Heart Institute Scientific Director Dr. Peter Liu, who originally came up with the idea of giving Marcel and Milne a memorable send-off.

“They love science, and to me it was a logical thing that we bring the best people from around the world who are doing this work that they love,” he said. “We want to continue in the footsteps laid down by these giants. Even though they may be retiring, the younger generation is carrying on, and the story continues. 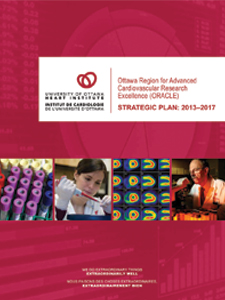 Following the Ottawa Heart Research Conference, the University of Ottawa Heart Institute released its five-year strategic plan for research. Entitled “Ottawa Region for Advanced Cardiovascular Research Excellence (ORACLE) Strategic Plan: 2013-2017,” the plan lays out a vision for positioning the Heart Institute and its regional partners as “leaders in cardiovascular innovation and knowledge translation.”

The strategic plan identifies four priority themes that will guide research efforts in the coming years:

“Ultimately, the outcomes from this strategic plan will benefit the citizens and patients of Ottawa, the Champlain region, the provinces and territories of Canada, and citizens of countries across the globe,” said Dr. Peter Liu, Scientific Director. “To achieve this, we will create multidisciplinary Innovation Clusters reflecting each of the four themes in order to foster collaboration and leverage Ottawa’s unique regional advantage.”