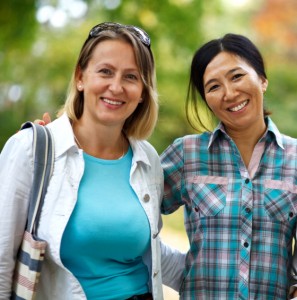 The good news is that their hearts are in the right place. Women in Canada see themselves as their families’ “heart keepers,” playing a significant role in maintaining everyone’s heart health, whether it’s the food they serve, the physical activity they encourage, or the non-smoking households they preside over. In fact, two-thirds indicated that they have the greatest influence over their families’ health.

The not-so-good news is the first-ever Canadian survey of women’s knowledge and attitudes about heart health has found major gaps between what women think they know and what they actually know. Their knowledge of the symptoms of heart attacks and the risk factors that lead to them is not as good as they think it is, and their perception of their own risk of heart disease is significantly lower than their actual risk.

The national survey, published this month in the Canadian Journal of Cardiology, was carried out by the Canadian Women’s Heart Health Centre (CWHHC), a new initiative of the University of Ottawa Heart Institute that will be formally launched this September.

Lisa McDonnell, the study’s lead author and Program Manager for the CWHHC, said that she was surprised by the low levels of awareness about the risk factors for heart disease.

“The knowledge obtained from this survey,” said McDonnell, “Provides invaluable insight into what women want and need and will help us develop the Centre’s programs and services.”

It also highlights the fact that existing efforts at heart health promotion are not reaching most Canadian women.

Among the study’s findings:

The survey results regarding the role of women as the “heart keepers” of their families underscore the importance of the Canadian Women’s Heart Health Centre, said McDonnell.

“There are always one or two family members standing by the bedside [of a Heart Institute patient] and within five to ten years, they are often our patients too,” she said, because lifestyle risks are usually shared in families. “By helping women, we’re going to have an impact on their heart health and that of their kids.”

The CWHHC is targeting women who already have heart disease and those who are at moderate to high risk of developing it. The Centre has identified specific sub-groups of these women and will target efforts to reach each of them.

“We think it’s important to establish where we’re starting from,” added Robert Reid, PhD, Deputy Chief of the Division of Prevention and Rehabilitation, which houses the CWHHC. “This is really about how to help women take more control of their lives.”

In June 2014, the American Heart Association released a scientific statement highlighting the fact that diagnosing coronary heart disease in women has become more accurate due to recent gender-specific research. Previously, physicians used the male model of coronary heart disease to diagnose women, meaning that women who did not fit the model did not receive appropriate treatment, increasing their risk of a heart attack.

The statement underscored the importance of understanding clinically relevant differences between women and men and included recommendations for healthcare professionals when diagnosing heart disease in women.