The Heart and Stroke William L. MacDonald lectureship series was established in 1970 by the Board of Directors of the Heart and Stroke Foundation (previously known as Ontario Heart Foundation) in memory of the President of the Board, William L. MacDonald. The lectureship, presented annually at one of the six medical schools in Ontario, provides an opportunity for the research community and clinicians to share and discuss the latest issues with leaders in the cardiovascular field.

This year’s Heart and Stroke MacDonald lectureship will be delivered by Dr. Douglas L. Mann, Chief of Cardiology at the Washington University School of Medicine, who will be speaking on the Role of Innate Immunity on Cardiac Injury and Repair.

Dr. Mann is the Lewin Chair and Professor of Medicine, Cell Biology and Physiology, Chief of the Division of Cardiology at the Washington University School of Medicine, and Cardiologist in Chief at Barnes-Jewish Hospital in St. Louis. 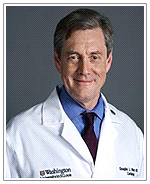 Dr. Mann received his medical degree from Temple University School of Medicine in Philadelphia and completed fellowships in clinical cardiology at the University of California San Diego, and Massachusetts General Hospital in Boston. Dr. Mann’s primary research interest has been the molecular and cellular basis of heart failure, with particular emphasis on the role of innate immunity in disease progression and recovery of the failing heart. The author of numerous peer reviewed articles on the role on inflammatory mediators in cardiac remodelling and myocardial recovery, Dr. Mann is also the editor of Heart Failure, A Companion to Braunwald’s Heart Disease, and a co-editor of Braunwald’s Heart Disease, the leading textbook in cardiovascular medicine. He is currently on the Editorial Board for a number of leading cardiovascular journals. Dr. Mann is a member of the American Society for Clinical Investigation, the Association of American Physicians, the Association of University Cardiologists, the Heart Failure Society of America and the American Clinical and Climatological Association. He is the past president of the Heart Failure Society.

About the lecture:
The Role of Innate Immunity in Cardiac Injury and Repair

This talk will review the studies that suggest that heart has intrinsic “hard-wired” repair systems that were designed to lead to repair and/or regeneration of cardiac tissue.  However, when this intrinsic repair system is excessively activated for a prolonged period of time, it can lead to adverse consequences, including dilation and dysfunction of the heart that lead, ultimately to the development of heart failure.