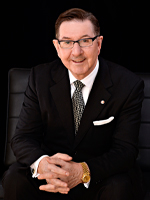 Professor of Medicine, University of Ottawa

Dr. Robert Roberts is the President and CEO of the University of Ottawa Heart Institute (UOHI) since 2004 and the founding Director of The Ruddy Canadian Cardiovascular Genetics Centre.  Under Dr. Roberts’ leadership, the UOHI has achieved world recognition being ranked by SIR SCHIMAGO in the top 2% of research institutions worldwide.

Dr. Roberts has had a distinguished and prolific international career as a Cardiologist, Educator and Scientist and has held several international leadership roles. Dr. Roberts continues to lecture around the world on his research.

He developed the MBCK Test which was used as the gold standard to diagnose heart attacks for the past three decades, followed by the discovery of several genes responsible for heart disease, including the first gene for heart attacks and is co-discoverer of more than 30 genes associated with heart attacks, since his return to Canada.

Dr. Roberts completed his undergraduate (Memorial University) Medical school (Dalhousie University) and training in cardiology (University of Toronto) in Canada.  He proceeded on scholarship to the University of California and was recruited to Washington University in St. Louis as Director of the Coronary Care unit and in 1982 recruited to Baylor College of Medicine in Houston as Chief of Cardiology where he served for 23 years. During his tenure in the United States, he held leadership roles at the NHLBI, American Heart Association (Vice-President) and the American College of Cardiology (Chair of Annual Scientific Session).  read more »