A Rehab Journey to New Dreams 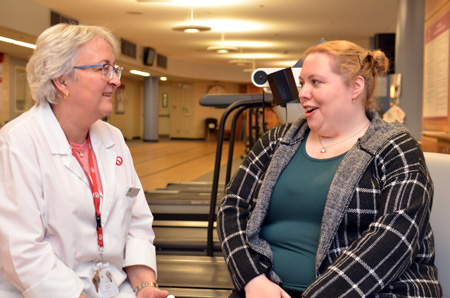 Rebecca André was 21 years old when she first developed blood clots. As her condition got worse, Rebecca had more difficulty breathing and moving, and had gained weight. Eventually, she was diagnosed with chronic thromboembolic pulmonary hypertension (CTEPH). CTEPH is a rare type of pulmonary hypertension (PH) where thrombi (fibrinous clot masses) get stuck to the lung’s blood vessel walls and block the blood flow from the heart to the lungs. This reduces the availability of oxygen to the rest of the body.”

At one point, bariatric surgery was suggested to help her, but she wanted to be in better shape before going through this major surgery. That’s where the team at the University of Ottawa Heart Institute’s Pulmonary Hypertension Clinic came into play. Dr. Lisa Marie Mielniczuk, a cardiolologist, and Carolyn Pugliese, an advanced practice nurse, helped her get ready for the surgery. Thanks to the stellar teams at The Ottawa Hospital and the Ottawa Heart Institute, who worked in synergy, the surgery was a great success even though Rebecca’s CTEPH had added additional risks to the procedure.

After her surgery, Rebecca started losing weight, her energy was back, but she didn’t know how to work with her body anymore. Carolyn at the PH Clinic suggested: “Why don’t you try Cardiac Rehabilitation (CR) at the Heart Institute?” Rebecca agreed right away since working out on her own already seemed too intimidating and scary. 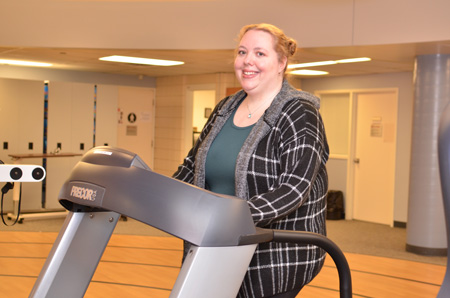 She enrolled in CR and worked with Jossline Jeha, a physiotherapist, who supervised her exercise class at the Heart Institute. An important consideration was which class was appropriate for Rebecca. Rebecca and the CR team decided to start her in a low intensity class in which many older patients were enrolled. In fact, as one of the youngest in her class, she felt that it wasn’t normal to be this sick at her age. But she decided to fight her own battle and to focus on her own path.

In this safe environment, where she was consistently monitored and supported, Rebecca learned how to work with her new body, how far she could push it and felt able to work harder.  Rebecca was extremely motivated as she came from Cornwall twice a week for her one-hour class!

What did she get from CR? “I learned to trust my body and that it could handle it. I now feel I can take more, I can expect more!” But her road to recovery has not been perfect. This winter, Rebecca became ill and was not able to participate in her class. As she got better and resumed her physical activity, she realized she had fallen back. This showed her the importance of being active on a regular basis and to keep moving.

More importantly, CR changed her life. Rebecca says that going through this journey has given her a second chance at life and even paved the way for new dreams.  During her CR sessions, she had the opportunity to work with Laura Cupper, a vocational counsellor, who helped her sort through what she wanted for her future. Rebecca is now planning on going back to university to become an ESL (English as a second language) teacher.

Rebecca is now doing well! Her weight loss, new physically active lifestyle and medication for CTEPH are helping her become the best she can be. As for the question that used to scare her: “Am I going to be OK?” she now knows the answer: “I will be better than OK.”